All done … the goal that was set earlier this year that I thought would take 3 years is now completed.

The atmosphere on the day was amazing – and the weather was magnificent – about 15 degrees in the morning and went to about 20 by 12 pm. No wind and just beautiful blue sky.

The image below shows the Course Map of the run. 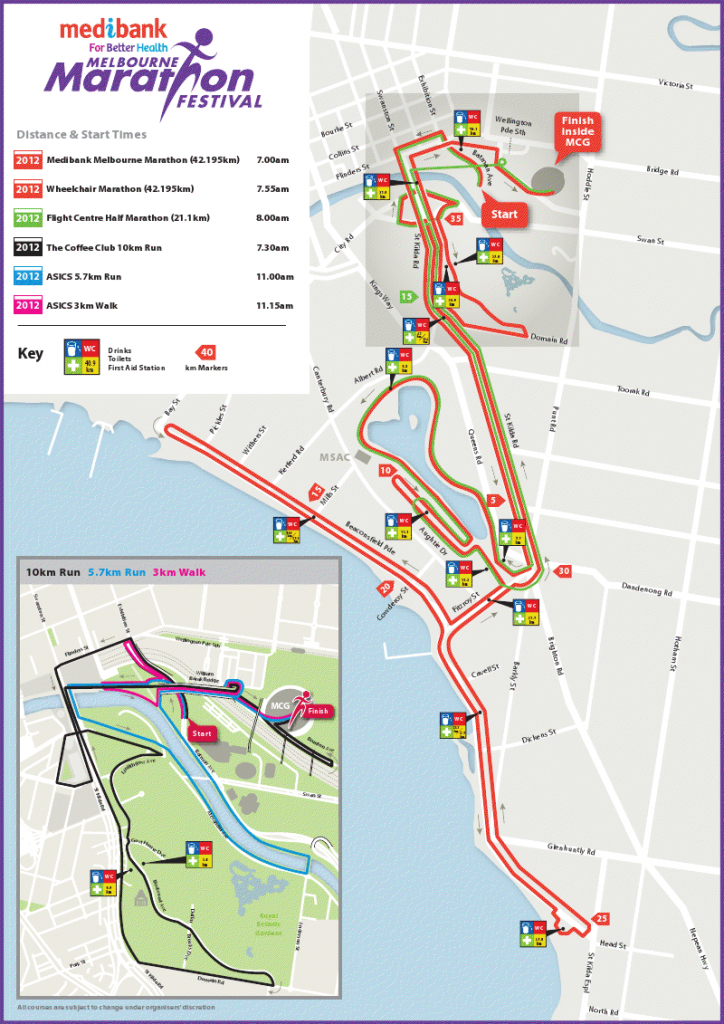 My plan was to keep a pace of about 5.30min per km which was going to get me to that time – and when I started running – there were pacesetters with balloons that said what time that pacesetter was going to run at – so I figured if I keep up with the guy at 4hr – I should do ok.

The event was really social – lots of people chatting along the way (at least in the beginning there was) – and everybody was really friendly. As I couldn’t see the 4hr balloon – I just figured that I’ll find some runners that look like they know what they’re doing and run along with them. I knew also that there were going to be a couple of friends from my triathlon swim squad running along – so if I could find them – that was going to be great.

There were about 7,000 people running the full marathon – so as you could imagine – it wasn’t going to be an easy feat to find them. However by around Albert Park Lake – I noticed one of the guys who was wearing the triathlon suit from my group and I thought I’ll tag along with him. He is a pretty strong runner – so I thought if I can stay with him for at least the first 20 kms – that would be awesome.

In the end it worked out that we ran about 30 kms together and it certainly made the run a lot more fun and easier – he also kept my pace at about 15 seconds faster per km than I was used and although it increased my heart rate – I was prepared to pay that price, because it was going to get me to a quicker time (perhaps :)).

All was going well until about the 30km mark which was the turn back into Fitzroy Street – when I started feeling that I’m losing pace and can no longer keep up at which point my friend took off and I continued on my own.

Then began the mindset race – how to keep going when everything is starting to hurt and legs and knees are aching. I’ve also been keeping up my nutrition – my own drinks had finished by then – so I had to start resorting to the drink stations provided and it was ok – but not the same as my own mixture had a really good set of both natural electrolytes and also an energy boosting concentrated nutritional drink that kept my sugars up.

So by the time I hit City Rd – by then everything inside was telling me to slow down and start walking – but I pushed through it and just kept the mantra going in my head – (Thanks to Kerwin Rae: This is easy, This is simple, Oh my g-d this is fun!) – it seemed to work and my heart rate slowly came down from the peak of around 179 or so down to below 170.

And then by the time I got through Domain rd – there were already people cheering us along who had finished the race – and I thought that was really awesome!

So when it was around 39 kms – I noticed that my heart rate had dropped to around 162 bpm – I thought “wow, I’m slacking off and I have energy left”. That was a great boost – I started sprinting and ran the last part of the way in 4.30min per km instead of the 6.30 min per km that I was doing for the last 6 or so kms.

Then when I ran into the MCG – I was sprinting and overtaking a whole heap of people who were barely making it to the end.

So I was pretty elated to complete roughly in the time that I set out to and immediately after – wasn’t so sure I’ll ever want to do it again. We’ll see though what’s on the horizon!

All in all though there are a number of people to thank for making this experince so awesome for me!

My wife and family – for putting up with me and the training regime that I needed to put myself through to get there.

Oscar Carlson – for the mindset and running technique coaching – my favourite saying from him is: “gotta be fair dinkum” – great words coach!

Raymond Holt – he was brilliant in the training and being there for my long distance runs.

David Guest, Tony Shelper and Greg Loft – the Tuesday and Thursday running buddies and those who really inspired me to do the marathon in the first place.

Graham Bell – my triathlon friend who was absolutely invaluable in the first 30kms of the run – kept my pace on track and made the run so much easier and fun.

And ultimately all my friends who kept me accountable and persistent in achieving this goal – if I can do it – anyone can!

« Swimming and Running – pre marathon
Ironman is it! »